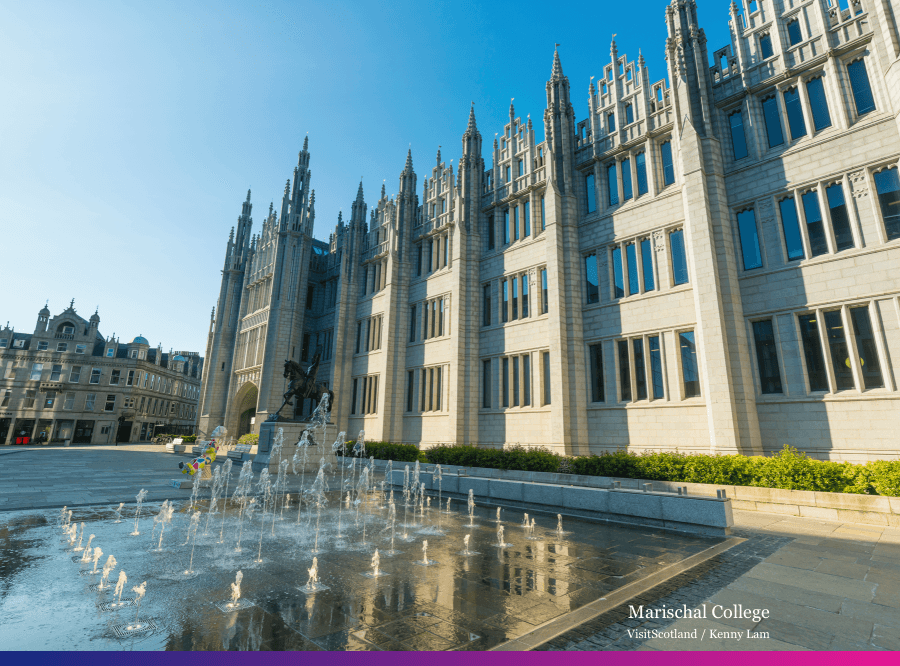 Aberdeen is calling you: find out why it’s your ideal cultural break

From its historic old town to the Aberdeen Art Gallery and a range of other fascinating attractions, there’s plenty to explore in Scotland’s sparkling city by the sea

You may know it as the Granite City, but there is far more to Aberdeen than its distinctive grey architecture. Situated in north-eastern Scotland, the city is nestled right by the sea, with a mile-long stretch of golden beach and a harbour where you’ll often spot a pod of bottlenose dolphins.

Whether you prefer exploring at your own pace or taking part in one of the many available walking tours, there are plenty of unique historic districts to visit and stay in. Less than 3km from the city centre, the cobbled streets and historic buildings of Aberdeen’s old town will make you feel as if you’ve stepped back in time. There’s also a range of vibrant murals and installations available to view for free across the city, thanks to the annual Nuart Aberdeen street art festival.

Easily reachable by plane, train, car or bus, Aberdeen is the perfect destination for a city break. Read on to discover just a few of its many cultural highlights. 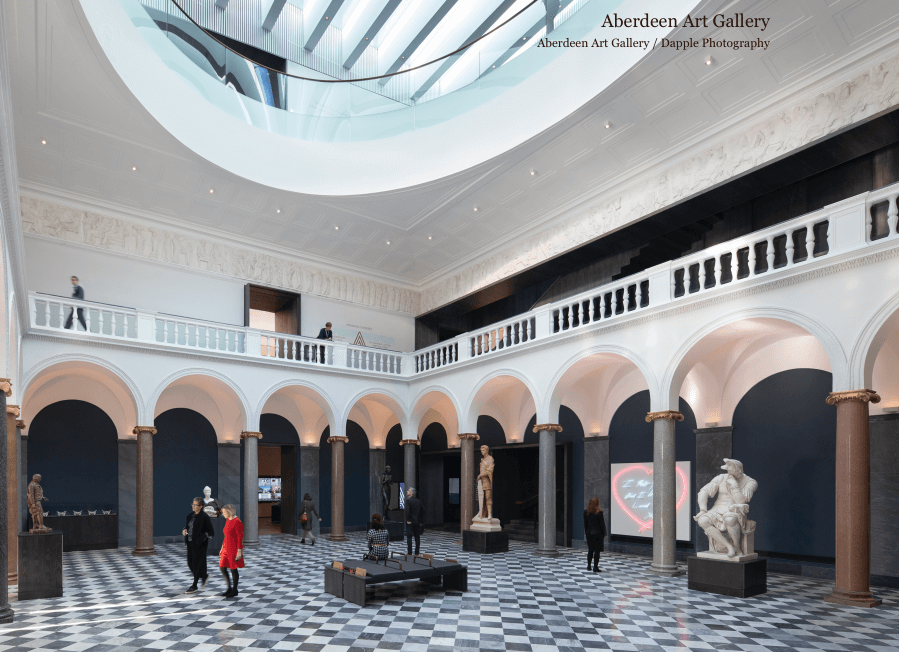 Housed in one of Aberdeen’s grandest granite buildings, Aberdeen Art Gallery features a Recognised Collection of National Significance that’s regarded as one of the UK’s finest. Spanning more than 700 years, the collection includes a staggering range of historic and contemporary paintings, prints, sculptures, crafts and jewellery.

Marvel at the works of many important Scottish artists, designers and makers, such as Henry Raeburn, Joan Eardley and Samuel Peploe, as well as nationally and internationally acclaimed artists, including Barbara Hepworth, Francis Bacon and Claude Monet.

The gallery reopened in 2019, following a landmark transformation which made it even more welcoming, accessible and sustainable, and has since won Art Fund Museum of the Year 2020 and Scotland’s Building of the Year 2021. Today, it houses 18 captivating collections, each with its own story to tell. There’s always something new to explore, including the latest special exhibition, The Galloway Hoard: Viking-Age Treasure. 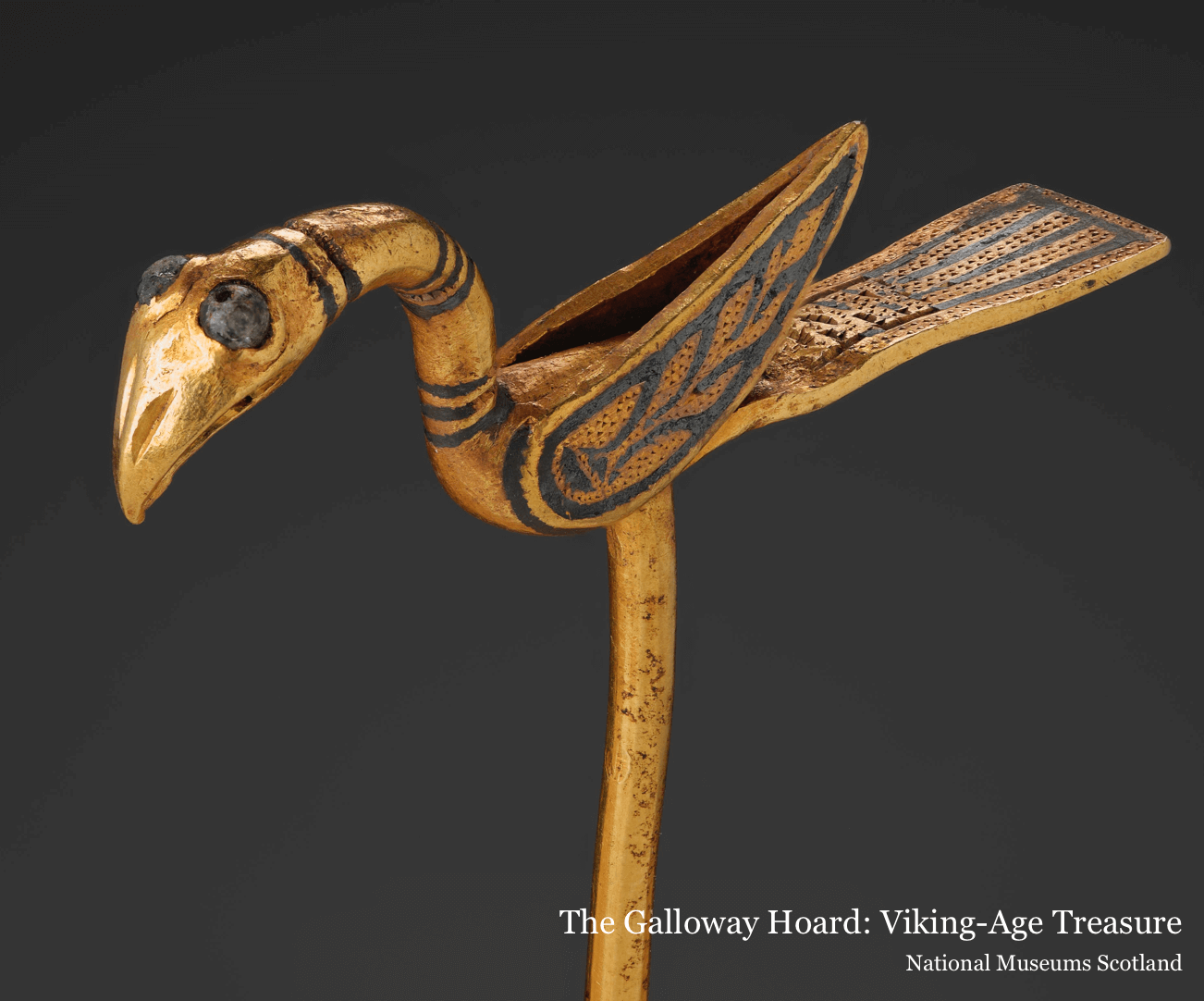 On display at Aberdeen Art Gallery from 30 July until 23 October 2022, The Galloway Hoard: Viking-Age Treasure is a free exhibition that brings together the richest collection of rare and unique Viking-age objects ever found in Britain or Ireland.

Buried around 900AD, the Galloway Hoard features a stunning variety of materials and treasures from Ireland, the Anglo-Saxon kingdoms and countries as far away as Asia. The Hoard transports us back to a critical moment in history: the formation of the political entities we now know as Scotland, England and Ireland, in a time of Viking raids. See over 100 artefacts, from silver, gold and jewelled treasures to rarely surviving textiles, including wool, linen and Scotland’s earliest examples of silk.

The Galloway Hoard was discovered in 2014, and acquired by National Museums Scotland in 2017. Since then, it has been undergoing extensive conservation and research, and its treasures are transforming our understanding of the Viking Age in Scotland. This exhibition shows the Hoard in a whole new light, as cleaning and conservation has uncovered the objects’ intricate designs, not seen since their burial more than 1,000 years ago. You can also delve deeper and examine hidden details found in X-rays, CT scans and 3D models. 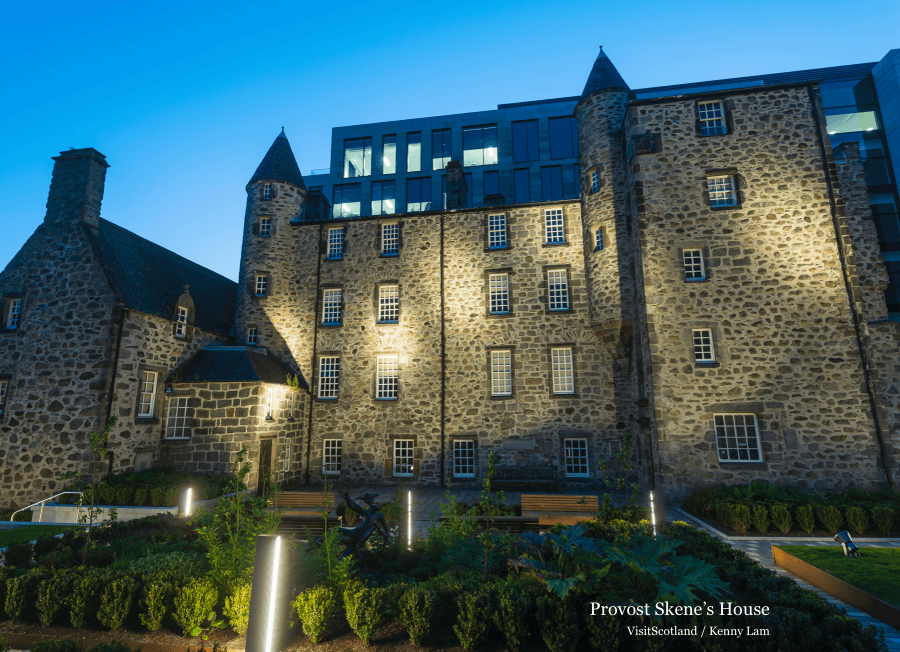 A city of culture

There are plenty of other ways to delve into Aberdeen’s rich history at no additional cost. For instance, Provost Skene’s House celebrates the pioneering people of Aberdeen and north-eastern Scotland, who not only shaped the  city, but also helped transform the world. Housed in the oldest surviving townhouse in Aberdeen that dates back to 1545, this newly refurbished attraction shares the stories of more than  100 of the region’s most remarkable individuals, including inventors, writers, sporting champions, performers and more. From Robert Thomson, inventor of the pneumatic tyre, to Thomas Blake Glover, an important figure in the development of the Mitsubishi Corporation in Japan, you can learn about them all via a range of fascinating interactive displays.

Overlooking the harbour, the Aberdeen Maritime Museum features four floors of rich and varied collections that tell the captivating story of the city’s long and often dramatic relationship with the sea. It covers everything from the earliest days of trading, fishing and shipbuilding, to the discovery of North Sea oil and gas, to Aberdeen’s place today as a leader in global energy transition. Highlights include intricate ship models, whaler’s harpoons and scrimshaw, rare examples of medieval imported goods, a complete lighthouse lens assembly and the entire deck of a historic steamer.

When you’re taking a break from exploration, you’ll be pleased to hear that there’s no shortage of fantastic food and drink options in Aberdeen, from Aberdeen Angus beef and freshly caught North Sea fish to Scottish whisky and locally brewed beer. There’s a great choice of dining locations too, including The Silver Darling or Café Boheme, and the city even has its own Aberdeen Gin Distillery if you fancy making your own gin. After dinner, you could even top off your evening with a show at the historic His Majesty’s Theatre, a concert at the Aberdeen Music Hall or an event at the state-of-the-art venue P&J Live for a truly perfect end to your stay. 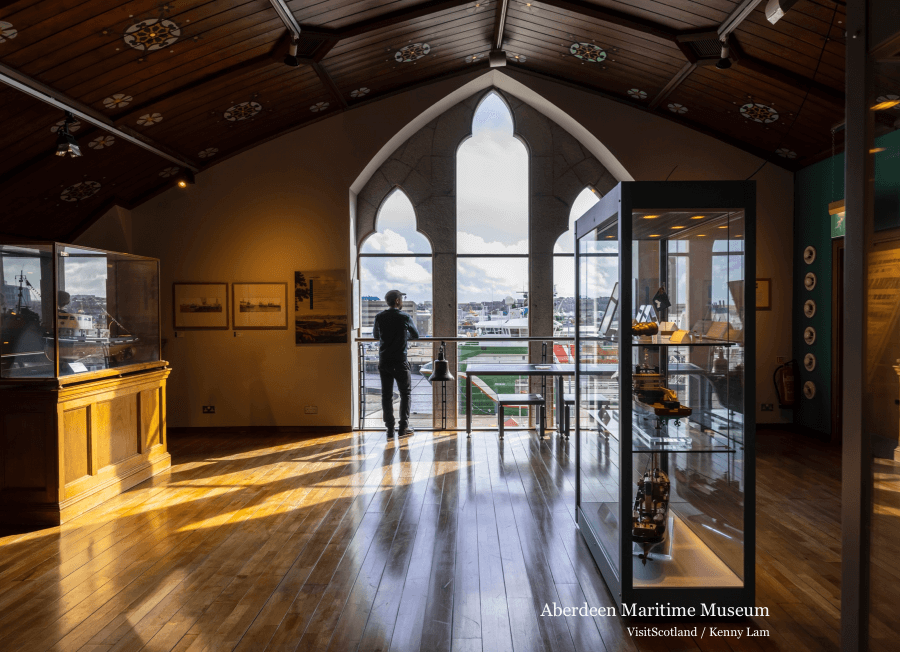